Rui Costa: “I can win the Tour de France in a couple of years” 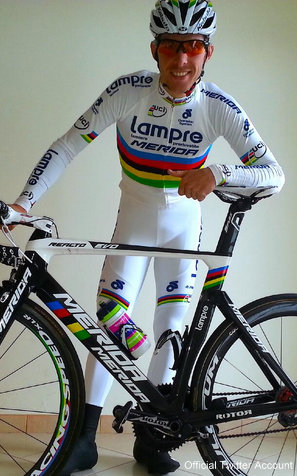 The first Portuguese rider to become world champion, Rui Costa is preparing for his 8th season as a pro, with the inaugural edition of the Tour of Dubai being his first race of the year. 2014 will be a very important season for Lampre-Merida’s rider, who wants to get as many wins as he can in the prestigious rainbow jersey. Since his win in Firenze, Rui Costa is a very busy man, but with the help of his agent, Jordi Quintana, and Andrea Appiani, Lampre’s press officer, I got to talk to him for a couple of minutes and find out what are his plans for this year.

– Rui, almost four months passed since you have won the rainbow jersey. How are things, what changed during this time?

There have been a lot of changes. The most important change is the number of hours of the days. Maybe you don’t believe me, but I am not sure that days have 24 hours now. I am absolutely sure that days had 24 hours in the past, but now, after the victory in Italy, it seems that the days are shorter and shorter. I have to answer a lot of interviews, I am requested for ads, and of course I need to train hard. So, it is not easy to find the time for everything. But the most important thing is the training!

– How important do you think your win is for the development of Portuguese cycling?

I can not answer it. I want to be humble and don’t think about this kind of questions. Anyhow, the support of the Portuguese fans is really strong and I really appreciate it. We have a great generation of riders in my country now and we will achieve more victories in the following years, for sure! I wish that my rainbow jersey can be an extra motivation for all the young talents from my country! But it is too early to answer this question. Also, I wish that all the World Tour teams open their doors to Portuguese riders, because we have a great generation.

– You already had an impressive CV, but now, as world champion, do you expect to be even more difficult to win races, as your opponents will keep a close eye on you?

Yes, of course! It is more difficult to win races when you are the world champion. Anyhow, with or without the rainbow jersey, nobody is going to give you one stage of the Tour of France, for example. With the rainbow jersey it is not possible to surprise the other riders. But in races as the Tour de France or the Tour de Suisse, you can not win if you are not the strongest.

– What are the goals for this season with your new team, Lampre-Merida?

It is a new season, a new team, but no new goals. It is true that I will have a different approach to this season. For example, I will have more freedom for the important races than in Movistar. But the calendar will be similar, with Classics (Amstel Gold Race, Flèche Wallonne, Liège–Bastogne–Liège), one-week races (París-Nice) and, of course, three-week races (Tour of France).

– You won the Tour de Suisse in the last two years, but now, as you’ll be targeting the Tour de France, is there a chance to do the Dauphiné instead?

Of course, I will go to the Criterium of Dauphiné in the future, but for 2014 we spoke with the team and it seems that the best option is to ride the Tour de Suisse again. When you win a race and you have the number one, it makes sense to run again and defend your trophy from the previous year. It is a way to respect the organizers and all the fans that supported you in the past.

– What do you think of the course of the Tour de France?

I don’t like to speak all year long about a race that takes place in July. I prefer to focus on the first races of 2014. We will have time to think and speak about the Tour in the future. The Tour is always the hardest race, so it is simple: it will be very hard again. The big change are the cobbles in the first week. But we have a lot of kilometres of ITT and mountains, the heat, the strongest riders in the World. This is the Tour!

– Where do you think there’s still room for improvement and on what will you work during this season?

I have improved every year, so I hope the same for this season. At this level, you can not focus only on the ITT or the mountains. Normally, I wish to improve my endurance. This is the big key. I am 27 years old and I hope I can keep improving in the next two-three years at least.

– When it comes to future goals, what other races would you like to win in the following years?