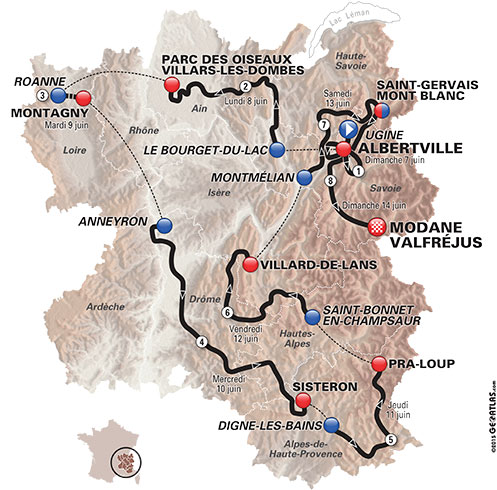 – Bernard Hinault, Nello Lauredi, Charly Mottet and Luis Ocaña share the record for the most wins, 3

– France leads in an all-time nation standings, with 30 victories

– 13 countries have had a champion in the Dauphiné; surprinsingly, Italy isn’t on the list

– When it comes to stage wins, Bernard Hinault has the most victories – 10 – as well as the most days in the yellow jersey, 19

– The longest edition had 1935 kilometers and took place in 1956, when Belgium’s Alex Close finished first

– In 2001, Christophe Moreau defeated Pavel Tonkov for just one second, smallest ever gap

– Three former winners will be at the start: Chris Froome, Andrew Talansky and Alejandro Valverde

– The cyclists in the 2015 race have won a combined total of 5 Grand Tours, 9 Monuments, 3 world titles, and more than 100 Grand Tour stages

– 35 countries will have at least one cyclist in the race, with France topping the list (31)