Toms Skujiņš: “I want to show that I belong with the best” 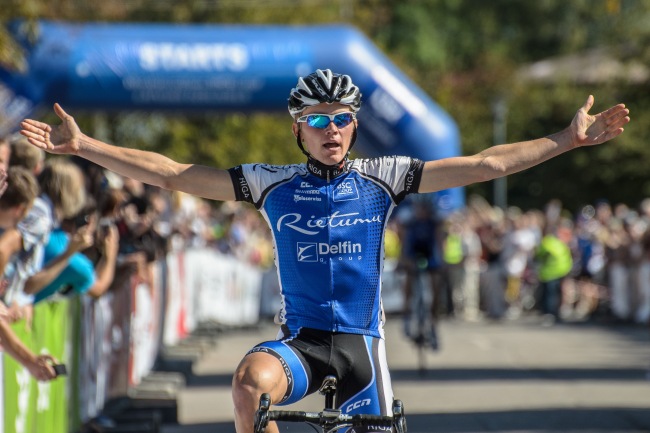 This year, Latvian cycling received a boost at the U23 category, and one of the riders responsible for this is Toms Skujiņš. Only 22 years old, the cyclist from Carnikava had three wins, the most important of these coming in the overall classification of the Peace Race. It wasn’t the only highlight of the season for Skujiņš, who raced also the World Championships in Firenze and finished the road race 5th.

A strong rider, who isn’t afraid of pain, hard one-day races and mountains, Toms Skujiņš now hopes to get a contract in the pro peloton, in order to show on the big stage what he’s made of. If you would like to know more about why he got into cycling, what he thinks of his results so far and what are his dreams for the future, read the following interview.

– Toms, how did you start cycling, what made you choose this sport?

I was doing all kinds of sports before I started cycling. I started with judo, went to ice hockey and then played floorball. But when I was playing floorball it was a bit too easy. My sister’s boyfriend (Janis Kaupe) at the time was really keen on cycling and he took me to my first MTB race. I loved it. The freedom, the adventure, it was a real challenge, so at first I started racing MTB and then a few months later, another friend (Reinis Simanovskis), who was already training in road cycling, took me to his coach and I started training with that group.

– Who supported you in the beginning?

The club I joined had almost everything. In the beginning you got a shitty bike, when you started showing you were good, you got a better one, then if you really could hurt everyone, you moved another level up and so on. They also had some shoes, clothes and other stuff. I also got some accessories from friends, and a few things my parents bought me.

– After a very good 2010 season, you started riding for La Pomme Marseille and finished 2nd in the Tour of Flanders. How would you rate that performance from back then?

The 2nd place in Flanders felt like a win. I was super happy, because we went 2nd-3rd with a really good friend of mine. And because it’s a race where everyone watches the names in the top 6, I think it was better that we both got on the podium, then one of us win, and the other one arrive outside the top 10.

– Still, after another season with the team, you were dropped by them. Why was that?

In short, I was dropped due to the lack of results. If you look back at 2011, I really had almost nothing. Races when I was feeling good I just missed even a whisker of luck. But still the relationships with the manager are good. It was nothing personal, just business.

– This year, you’ve had some very impressive results, like winning the Peace Race, after attacking in the last stage. How was that win?

That was a really pleasant win. Especially, because of the treatment I got in the bunch after the first part of the race. I was alone, because the other guys from the team got dropped fast and no one would give me a millimetre in the bunch. I knew I was going good, but I didn’t know that it could be that good. The plan was easy though. Get away from the group and then be smarter then the guys in the break. Ok, it wasn’t a Nations Cup race, but still the field had really good names. And also it was quite a big hit in Latvia, because the Peace Race has traditions and was a huge race in the Soviet Union.

– You raced also the Tour of Norway and finished 10th, ahead of many well-known pro riders. Did that result gave you confidence for the future?

Yeah, for sure. When you are climbing with Laurent ten Dam and Bauke Mollema you know that you’re not the worst climber. That race for sure helped me to win the Peace Race a week later.

– Then came the Tour de l’Avenir and another top 10. Were you satisfied or do you think you could have done better?

L’Avenir was also one of the good weeks this year. I was a bit tired going into the race, but I kept my cool during the first stages and just sat in the bunch. When the first mountain stage hit I had a bit of technical problems and combine that with the fact that I hadn’t ridden in long cols for a really long time I lost a lot of time on the last climb. At that moment a 20th place on such I stage I was super pleased anyway, but when on the last stage I could attack the maillot jaune group and get a good gap I knew that if the race would have been a few more stages in the mountains I could have climbed up the top 10 more.

– One of your most impressive results in 2013 was finishing 5th at the World Championships, despite some serious knee problems. What are your memories from this race, was it above your expectations?

Worlds were above and beyond my expectations. 100%! The memories from that race won’t ever go away. Before the start I had 0 expectations. I hadn’t ridden the previous two days, just to let the knee rest. But even then when we started it hurt like hell. It felt really like someone was playing a guitar on your nerves, just from time to time he would pull on a string and you would feel the pain in your brain. But when we got to the laps I started to concentrate on the race, the knee warmed up and I could block out the pain. But it was still there and the last two laps I was sending mind signals to the bunch to go faster, because I was feeling that it’s starting to get worse and worse again.

– Over the years, you showed your huge potential in stage races, but also in one-day races. What kind of rider do you see yourself becoming in the future?

At L’Avenir and Norway I saw that my recovery is really good, so it would be a pity not to use it. But I have the head and the capabilities to ride one-day races with the best, so at least for now I will definitely do both with 100% commitment.

– And what race do you dream of winning?

To win a classic or any week long stage race would be a dream come true. The hilly classics, the cobbled ones, Tour de Suisse or a stage in a Grand Tour, I wouldn’t care.

– What are your chances of turning pro next year, considering the financial problems of more and more teams?

Chances are not that good. You can tell that it’s because of all the teams folding or that there are no new teams being built, but in reality there are a lot of U23 guys that get contracts, if you’re not one of them, then I guess you are not one of the best. But I’ll stay optimistic until I sign with a team for 2014, and then I’ll just do my very best again to show that I belong with the best in 2015.

– And what will you do if you don’t get a contract? Any back-up plan?

Yeah, for now I am talking with a few continental teams that would like to have me, so I won’t get kicked out of the sport I guess.