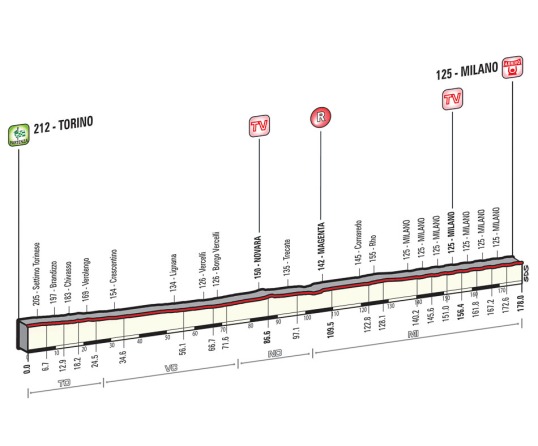 What happened on stage 20

Mikel Landa attacked Alberto Contador on the Colle delle Finestre and got a good gap, before other riders made the same thing and let the race leader behind. Eventually, Contador cracked, which allowed Landa to put 1:40 to his countryman in the valley before Sestriere. At the front, a group containing Fabio Aru, Ryder Hesjedal, Steven Kruijswijk and Rigoberto Uran rejoined Landa and Ilnur Zakarin, who was part of the early escape. Back in the Astana team car, Giuseppe Martinelli told Mikel Landa to pull hard for Aru, which the Basque rider did, and this finally led to an impressive attack of the white jersey wearer, that brought him the second stage win in a row. Alberto Contador finished more than two minutes behind, but still has a comfortable cushion and is sure of winning the Giro d’Italia seven years after his first victory.

Here it is, the final day of the race, a flat one for the fast men of the peloton, who’ll get another shot at glory. Starting from Torino, the 185-km long route rolls through the Po Valley along entirely flat roads, and reaches Milan, connecting the cities that served (Torino) and serve (Milan) as headquarters for the Gazzetta dello Sport throughout history. The stage course covers wide and mainly straight roads, with just a few city-centre crossings, with roundabouts, speed bumps and traffic islands being the main, “typical” obstacles.

The route arrives in Milano through Pero and the Expo site, and it enters the final circuit, to be covered seven times, and finishing in Corso Sempione. The circuit is 5350-m long and stretches along wide, well-paved avenues around the Vigorelli velodrome and the Fiera Milano City fairground. It features eight bends and four half-bends, and it crosses a tram-line twice (vertically). The home straight is 1-kilometer long, on 8,5-m wide asphalt road.

First in the red jersey classification, with a 17-point advantage over Sacha Modolo, Giacomo Nizzolo can cap it off in style, by taking not only the jersey, but also the stage victory, his first in a Grand Tour. But it won’t be easy for the 26-year-old, as Sacha Modolo and Elia Viviani will be in the mix at Milan, where also Luka Mezgec will try to go out with a bang, just as he did in 2014, when he scored a big victory in Trieste.

The Corsa Rosa returns to Milan for the last stage three years after Marco Pinotti took the victory in the time trial that run over the cities streets, while Ryder Hesjedal became the first Canadian winner of a Grand Tour. Last time the Giro d’Italia finished here with a stage in line, Alessandro Petacchi finished first, but was subsequently disqualified and the victory went to Argentina’s Maximiliano Richeze.