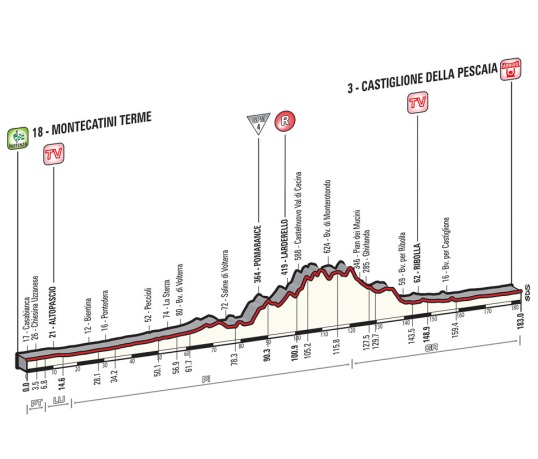 What happened on stage 5

For the second day in a row, the breakaway went all the way to the finish, where Jan Polanc won his first race. A 23-year-old who turned in pro in 2014, the Lampre-Merida cyclist became the second Slovenian to take a stage in this race, after Luka Mezgec. Behind him, Alberto Contador attacked from the peloton with four kilometers to go and only Richie Porte and Fabio Aru were able to follow him from the favorites group. The three launched an exciting sprint in the last 500 meters, with Aru finishing third and taking bonifications thanks to which he’s now just two seconds behind Contador, the new leader of the Giro d’Italia.

On Thursday, the peloton will line-up at the start in Montecatini Terme, one of the towns that have hosted the 2013 UCI World Championships. This stage is almost entirely flat, except for a short, central sector where the categorized climb is set. The first 80 km roll along mainly level roads across the Pisa territory. Just past Saline di Volterra, the route reaches the Colline Metallifere and goes ahead, passing through Pomarance (KOM climb), Larderello and Castelnuovo Val di Cecina.

André Greipel came to the Corsa Rosa with the goal of taking a win, and after failing to do it in Genova where he “didn’t read” the finale as he should have, the German rider of Lotto-Soudal has a big chance to make up for that in stage six, which totally suits him. On the other hand. Elia Viviani looks to be in a great shape, but the leader of the points classification will not be underestimated now, after his rivals made that mistake a couple of days ago.

Sacha Modolo will also be eager to bag a victory and make it two out of two for Lampre-Merida; for this, Modolo will count on the likes of Maximiliano Richeze and Roberto Ferrari, two cyclists that can prove very important in the last kilometers. Finally, Giacomo Nizzolo (who has had some health problems), Matteo Pelucchi and Moreno Hofland will be other sprinters hoping to cross the line first in Castiglione della Pescaia, but they’ll start as outsiders on Thursday, so a win of one of them will count as a semi-surprise.