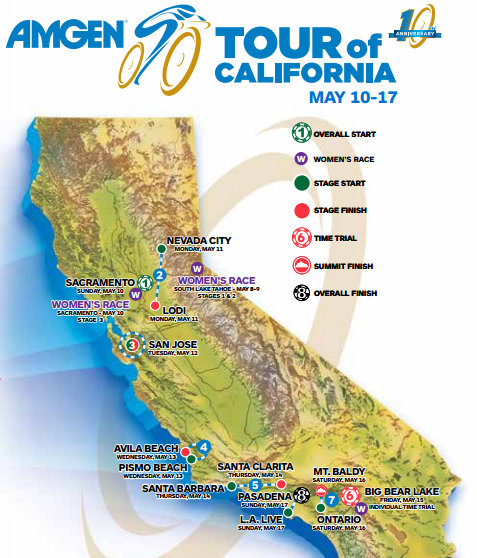 It’s a big year for the Tour of California – maybe the best stage race in the US – which celebrates a decade since its inception. Starting from Sacramento before finishing eight days later in the shadow of the Rose Bowl Stadium in Pasadena (the ninth-largest city in the Los Angeles County), the event follows a north-south route and promises to be give every type of rider in the peloton an opportunity to shine, as it has flat stages, some lumpy ones, an individual time trial and a big altitude finish.

After two days for the sprinters, in Sacramento and Lodi, the race will enter the mountains in stage three, when the peloton will tackle five categorized climbs (including Mount Hamilton), which could lay their mark on the pack, although you shouldn’t expect to see big gaps, a likely scenario being a breakaway that will go all the way to the uphill finish in San Jose. One day later, it will be another opportunity for the sprinters, in Avila Beach, where Jens Voigt took an impressive solo victory two years ago, while stage five should have the fast men of the peloton once again in the spotlight.

Big Bear Lake returns on the map this year, not with a road stage, but with a 24 km-long individual time trial, which should create some important gaps between the GC contenders, as the course – which is pretty much flat – favours specialists. One of the hardest ascents in the US, Mount Baldy, will give the pure climbers a chance to turn tables around and make their point on Saturday. The 20,8 km-long climb with a 7,4% average gradient featured at the 2001 and 2012 edition, when Chris Horner, respectively Robert Gesink won, and should provide a great show, before the race concludes in Los Angelest, with a pan-flat stage.

24-year-old Andžs Flaksis – former ITT national champion and 3rd at the 2011 U23 Tour of Flanders – is a fine connoisseur of the stage races that make up the America Tour, so I’ve asked the Latvian rider of Hincapie Racing Team to preview the course of the 10th Tour of California.

“I have been staying in the area of Sacramento for a week before the race, so I got chance to see stages 1 and 3. I think there are going to be three crucial days for GC guys for sure: first one is stage 3, with Mount Hamilton and the tricky descent that comes afterwards, so we might see the first time splits between the overall classification contenders there. Then there’s stage 6, with the Big Bear Lake ITT, and stage 7, which has the mountain top finish at Baldy. So these will be three key stages for the GC riders. Other stages might come to a sprint finish, but you can’t relax for a moment, because in the first two stages there’s a big chance of crosswinds, so you never know what can happen! That’s what is going to make this race really exciting, the posibility of having some splits and breaks in moments when this kind of things are not expected.”

On paper, Sky looks to be the strongest team, having two options for the overall classification: Sergio Henao and Peter Kennaugh. The Colombian has returned in the peloton in March after more than 10 months without any racing, following his knee injury in the Tour de Suisse. Although he never exceled in the time trial and risks losing some important seconds at Big Bear Lake, Henao can recover the time lost one day later, when the race hits Mount Baldy. If he’ll not be up to the task, then Kennaugh – the 2014 Tour of Austria winner – will be ready to step in and fight for the yellow jersey.

Andrew Talansky has never before finished on the podium of his home race, but this year he starts with a big chance of taking the victory. The 26-year-old American leads a very strong Cannondale-Garmin team, which also includes 2012 Girobio winner Joe Dombrowski, and is poised to finish first and show he’s on the right track for this summer’s Tour de France. He’s not the best on the climbs, but a solid result in the time trial can give him the upper hand over his rivals.

An injury has prevented Robert Gesink from racing for about two months this season, but the Dutch cyclist came back in April, at the Tour de Romandie, and his 15th place gave him the confidence he needed that he can return back to the top after the problems he has endured. A cyclist who always had good results in North America, even more often than he did in Europe, Gesink can fight for the podium at this year’s Tour of California, especially as he’ll be supported by Laurens ten Dam, whose help on the climbs can prove to be very important.

Another interesting team is BMC, which decided to go with Ben Hermans (who will get some precious help from neo-pro Joey Rosskopf) for the GC, after the Belgian has had an impressive ride at the inaugural edition of the Tour de Yorkshire, where he finished 6th, after tooking a stage win along the way. Trek Factory – the last US-based World Tour team on the startlist – has former US champion Matthew Busche and Riccardo Zoidl for the overall standings, but it will be very difficult for either of them to clock up a podium, a top 5 being more likely.

Who else can be a protagonist in the race? Well, Giant-Shimano has the depth to fight for the overall classification thanks to the likes of Warren Barguil (the 2012 Tour de l’Avenir champion) and Lawson Craddock, the latter – 3rd at the previous edition – prevailing over his teammate (at least on paper) thanks to his superior time trial skills. UnitedHealthcare comes with an in-form Janez Brajkovic, who can think of a top 5, Jamis-Hagens has a very strong and spectacular duo – Gregory Brenes and Daniel Jaramillo – capable of lighting-up the race on the mountains, while Hincapie Racing Team will hope Robin Carpenter, a stage winner at last year’s USA Pro Cycling Challenge, can take another memorable victory.

Last, but not least, there’s also Axeon Cycling Team, the squad managed by forme pro Axel Merckx. Don’t be fooled by the fact Axeon is a Continental team, as it has the depth to lay its mark on the race and get an impressive result in the overall standings. Winner of three races this year, James Oram is one of the squad’s leaders, and his time trial should place him in a nice position before Mount Baldy. Besides him, there’s also Tao Geoghegan Hart, a future Grand Tour champion, who comes here after finishing 8 th at the Tour of the Gila, last week.

In the sprints, Mark Cavendish will start as the big favorite and he’ll look to add to his tally of already nine wins this season. So far, the former world champion has won five stages at the event, which puts him on second place in an all-time winners list, and considering his current form, he should have no problem in taking at least two victories. At the start there’s also Peter Sagan, anxious to kick off his second half of the season with a couple of victories, and the California course can help him reach his target.

Other sprinters who can have a go in the flat stages are Danny van Poppel, Gerald Ciolek, Guillaume Bovin, Theo Bos, Ty Magner, Jure Kocjan and Lucas Sebastian Haedo. Finally, other riders who can fight for a stage win are Ruben Zepuntke, Alex Howes, Daniele Ratto (who comes here after a very strong Tour of Turkey), Julian Alaphilippe – the revelation of the Ardennes Classics – Jean-Pierre Drucker, Daniel Oss and Jasper Stuyven.

– The race was created in 2006, and the first winner was Phonak’s Floyd Landis

– The record for the most GC victories – 3 – is held by another US rider, Levi Leipheimer, who is also the cyclist with the most days spent in the leader’s jersey: 22

– Only three riders from outside of the US have won the race: Robert Gesink (Netherlands), Michael Rogers (Australia) and Bradley Wiggins (United Kingdom)

– The closest winning margin in the race’s history came in 2010, when only 9 seconds separated Michael Rogers and David Zabriskie

– There will be 18 teams (8 World Tour, 4 Pro Continental and 6 Continental) at the start of the 10th edition

– Two of these are winless in 2015: Hincapie Racing and Jelly Belly

– Most riders coming at the start are from the USA: 44

– Geoffrey Curran (19 years) is the youngest cyclist in the race, while Fred Rodriguez (41) is the oldest one